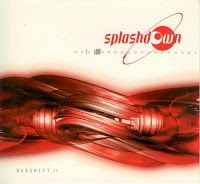 Splashdown took elements of pop, rock, electronica and fused them with Middle East influences to create something quite enjoyable to the ears. Lead singer Melissa Kaplan's voice seems larger than life, soaring above and through the multilayered music in such a beautiful way. They didn't release much music while they were a band, however, they've since oked the sharing of their catalog (along with previously unreleased albums too!) You can find those here.
This little entry is going to be about their Redshift EP. Probably my favorite or their albums, it's starts off with such a high with "A Charming Spell," giving the listener a perfect intro to the band. Rumbling electronic elements break open leading to your first taste of Kaplan's amazing voice. There's not much of the Middle East flavor in "A Charming Spell," but that influence becomes a lot more evident on "The Archer." "Mayan Pilot" is a funky short groove that sometimes I really dig and sometimes I just don't feel, but it's the EPs shortest track so I can't really complain. "Waterbead" is the most 'Eastern' track, more subdued and tranquil than the other songs with trip hop beats coming and going throughout to lift the energy of the song when needed. And it ends with "Ironspy," by far my favorite Splashdown track, and lucky for me it's on a few of their releases!
Splashdown - A Charming Spell (from "Redshift EP")
Splashdown - Ironspy (from "Redshift EP")
Posted by Craig Tamble at 09:37