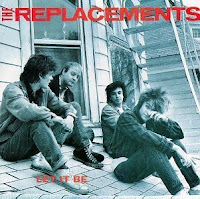 Starting their career as a tiny little garage punk band from Minneapolis, The Replacments became one of the defining bands of the 1980s (for those that kept it left of the dial). Their early albums were filled with fast songs with sloppy lyrics and silly jokes, but occasionally had a touch of brilliance sprinkled in (Hootenanny's "Willpower" for instance). They got into the loud fast music because they thought there were no rules and they could do what they wanted, but as front man Paul Westerberg put it:
"[T]here were rules and you couldn't do that, and you had to be fast, and you had to wear black, and you couldn't wear a plaid shirt with flares."
So in order to play the way they wanted to, Paul Westerberg and Co showed us that nothing is sacred in rock and roll by titling their final pre-major label release "Let It Be." Sure, there are still some silly songs on it, "Gary's got a Boner" is never going to pass for high brow song writing, but the heartbreak and abject loneliness of being a teenage boy has never been better captured than in "Sixteen Blue." "Answering Machine" works great as either an anthem about the pain of long distance relationships or trying to get someone back who's unwilling to take your calls. From top to bottom, there is no dip in power, energy, or emotion. It's just one of those albums that really is an all-time classic.
The Replacements - Androgynous (From "Let It Be")
The Replacements - Sixteen Blue (From "Let It Be")
Posted by Craig Tamble at 12:30