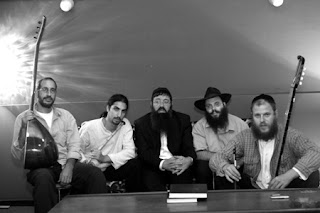 In honor of the start Hanukkah, I am posting some tunes recorded by Yehuda Ovadya Ftyad & the Ha'Yonah Ensemble known as the “Jewish Sacred Songs from Iraq.” I posted a song to my political blog sometime last year, but the entire record is worth a extended listens, even outside of the holiday season. You can buy the disc from the Olam Qatan bookstore in Jerusalem. The first track I have posted down bellow is a killer jam, and requires your immediate attention. Here is the CD’s notes:

“A concert album recorded in January 2004 at Bar-Ilan University, Yonat Rehokim (literally "The Dove of Distances") is a high-concept composition that explores longing in the hearts of Iraqi Jewish poets through chanting and slow, ethnic groove-based jamming.

The rhythmic drone of 11 men slowly playing old-time Middle Eastern instruments provides structure to the skilled Mizrahi hazanut of Yehuda Ovadya Ftaya.
Especially noteworthy are the wind sounds of David Menahem, the low-end plucking of Naor Karmi, the hand percussion of Yair Harel and Assaf Zamir, and the overall hum of the string section.

Ben-Gurion University's Prof. Haviva Pedaya is credited with having overseen the "concept, research, and musical arrangements," but Pedaya is also the spiritual center and frontwoman for the ensemble. Her compilation of rabbinical poetry written in Muslim lands throughout the centuries is painstakingly sensitive to the original beauty of the language, to an extent that in concert, all lyrics are projected on a screen above the ensemble.

The authenticity and breathtaking beauty of this recording are undeniable, and the mesmerizing atmospheric soundscapes of The Ha'yonah Ensemble have tremendous power to transport the listener.” 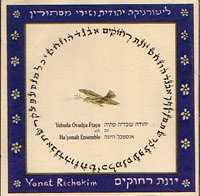