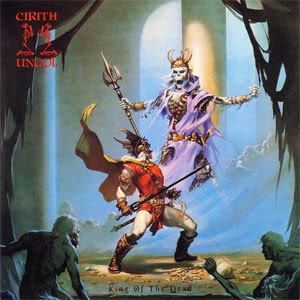 Cirith Ungol. For true nerds, the name conjures up images of elves and dwarves and all the mythical creatures of Middle Earth. But this is a metal band whose roots are in Ventura, CA. Some disliked the singers voice (too screechy) or the content of the lyrics (too corny) but for all true metalheads who lived in Ventura County and the central coast back in the early 1980s, they were mandatory listening.

I liked that Cirith was not similar to other Southern California rock bands like Van Halen or hairmetal groups like Ratt and Motley Crue. Instead, they had a distinct dark and gloomy sound, influenced more by NWOBHM and Black Sabbath than the local scene.

In addition to their music, another reason I was attracted to their albums was the artwork by fantasy artist Michael Whelan who designed the paperback covers for Michael Moorcock’s Elric of Melnibone series (DAW paperbacks). What can I say? I was into that sort of crap back then…

Their first album, “Frost and Fire,” is good, especially considering it was pressed in 1981 (!) I was listening to a lot more punk than metal by the time this one was released in 1984 but I think it is even better. Great music to listen to on a gray, rainy, winter day. So what if they sing about swords and sorcery, atom smashers, and black machines? You know you like it.

The lineup on this album is Jerry Fogle on guitar, Tim Baker on vocals, Michael "Flint" Vujea on bass, and Robert Garven on drums. Fire up a bowl and rock out.