His and Her Vanities: So what if they're from WI, it's good music. 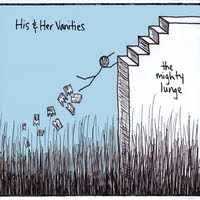 Ok, so maybe His and Her Vanities aren't the most prolific artists, they've had 3 albums in the past 8 years or so and have been around for even longer, but they make catchy crunchy pop music laced with elements of the NYC garage band scene from so many moons ago and Talking Headsesque New Wave style (especially on their earlier stuff). It's hard not to get excited hearing something so refreshingly...well...retro (is early to mid 2000s retro already?) in a non-ironic way. You can get their album direct from their label here.
His and Her Vanities - Agenda (from "The Mighty Lunge")
His and Her Vanities - Fragments (from "The Mighty Lunge")
Posted by Craig Tamble at 09:22