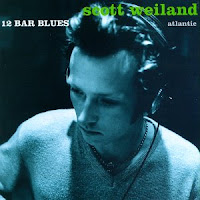 When Scott Weiland's solo album came out, it floored me. It was quite a departure to his normal work with Stone Temple Pilots. Less grungy guitars and alternative rock sensibilities, he introduced me to the notion of heavily layered music, electronic components, random breakdowns, and through these made the idea of "unaccessible music" accessible to me. While the release was a commercial flop (it didn't even break the top 40 here in America), I owe so much to the release as an eye opening experience that there really were other styles of music out there that weren't on the radio. I still go back to the album every few months and the songs still hold up. They're not late '90s dated like the rest of STP's catalog (or any other band from that era really). Do yourself a favor and seek out the album, you can probably find it for a few bucks at a used CD shop.
Oh, and the best part of the album....someone being credited with playing the "Godzilla guitar."
Scott Weiland - Desperation #5 (from "12 Bar Blues")
Scott Weiland - Divider (from "12 Bar Blues")
Posted by Craig Tamble at 09:01