Sweep the Leg Johnny: It's like a crane kick to your face! 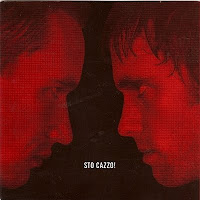 Sweep the Leg Johnny was a legendary alto-sax driven math rock band from Chicago...at least legendary in my mind. The sax riffs from front man Steve Sostak gave the band's more frenetic songs a different feel from similar artists at the time; it was a refreshing change from the flittering trebley guitar call and response many math rock bands had at the time. His sax also gave their more post-rockish semi-meandering mostly instrumental efforts a similarly different feel. Rather than the more ubiquitous string instruments giving a lusher feel to the music, Sostak's sax would go from cool jazz mellow to avant garde Ornette Coleman-esque squawking and back again. Below are examples of each, the harder edged "Walking Home on the Emergency Bed" and the more mellow "Columbus Day," both from their wonderful album Sto Cazzo!.
Walking Home on the Emergency Bed: