No one Knows who they were, or what they were doing 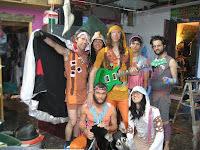 Bulp Records out of Michigan has released some great experimental bands from the Midwest, including the now infamous Elvish Presley. Mixing the Incredible String Band with Black Sabbath and a healthy dose of mysticism and all around fantasy silliness, Elvish Presley put out three records before moving back to their hobbit holes. Or hippy commune, I don’t remember which. You can be assured there were plenty of drugs wherever they crawled back to.

Here is the first track from their “Black Elf Speaks” record, released in 2003 titled "Creation Story". It's almost as great as Stonehenge by Spinal Tap.