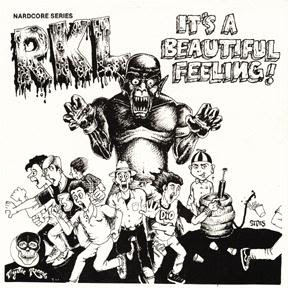 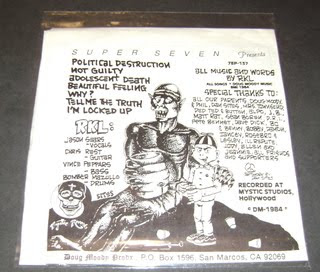 [back cover image courtesy of True Punk and Metal]

Rich Kids on LSD (RKL) are one the bands that changed my life. Previously caught up in the world of heavy metal, I thought punk rock--with the exception of DEVO--was music produced by talentless, three-chord imbeciles. But after seeing Black Flag in 1984 at the Adams Avenue Theater in San Diego with my good childhood friend David S. I was hooked. That weekend I recorded as many of his albums as I could. Black Flag, Fear, Bad Brains, Battalion of Saints, True Sounds of Liberty (TSOL) EP, Suicidal Tendencies, Circle Jerks, Millions of Dead Cops (MDC), Minutemen, Dead Kennedys, GBH, Channel 3, and others.

When I got back to Santa Barbara, I was a changed teen. My metal friends wondered what happened to me. I started to seek out hardcore punk albums in my local record store and through fanzines like Maximum Rock and Roll and Flipside and the skateboarding mag, Thrasher.

It was at this time that I became aware of a local punk band called RKL. RKL was amazing. From the first note to the last. This is truly the music of my teens and was always the appropriate soundtrack whether skating, hanging out, or getting trashed. One of the great things about the punk rock scene at that time was they were regular, down-to-earth people, not like the rock stars of metal.

I remember seeing RKL at the Red Barn in Isla Vista (so many great bands played there) in '84 with my homeboy J.J. Shortly after the show this 7" was released and it still blazes twenty-five years later. Hardcore punk with some wicked changes and excellent lyrics. Seeing them live was even better. There was nothing like it. I had the chance to see and hear them progress over the course of two decades and I feel truly honored to have had that opportunity.

The line-up changed over the years but this is what I consider the classic RKL: Jason Sears (RIP) on vocals, Chris Rest on guitar, Vince Peppars on bass and Bomer Manzullo (RIP) on drums.

Side A.
1. Political Destruction
2. Not Guilty
3. Adolescent Death
4. Beautiful Feeling