Paul Whiteman and the Jazz Era 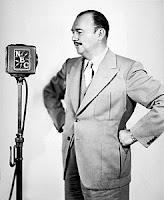 Paul Whiteman was one of the most popular Jazz directors of the 1920s and was often referred to as “the King of Jazz,” a label he probably didn’t deserve, but some of his group’s recordings from the Jazz Era still stand out as excellent contributions to American music.

He had his share of detractors in his day. Some argued his music was Jazz in name only, and was simply repackaged pop music sold under a different label. Others argued he had taken black music and black culture, and appropriated it for white audiences while leaving out its more interesting and significant characteristics. Both of those claims unquestionably have validity, but the quality of his recordings still stands out and should not be swept into the dustbin of history.

Here is his recording of the infamous “Gloomy Sunday,” also known as the Hungarian suicide song. A large collection of Whiteman’s songs can be downloaded for free here, and you can buy collections of his music here.