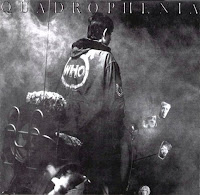 Apparently there was a major sporting event yesterday and apparently there was a band that played during the middle break of said game that I am a big fan of. Earlier in this blog, I made statement that may have been "fact: Quadrophenia is the greatest double LP of all time," well, it's time to unveil the the truth behind the statement. Yeah, Tommy's pretty good, people seem to like The Wall, and I suppose David Bowie, Lou Reed, Genesis, and a slew of metal bands have all put them out too, but when it comes to raw power and effectiveness, a storyline that makes sense (a deaf, dumb and blind boy playing pinball that becomes the new Jesus...really Pete?!), nothing comes close to Quadrophenia.
A prelude that introduces the major musical themes throughout the work starts us off and sets the stage for the ride Jimmy will take through the mod and rocker world of early 60s Britain. Popping pills, fighting, and contemplating life's most depressing elements....Jimmy's life isn't all that great, but I'll be damned if I don't relate and hang on to every note and word. It's intense enough to keep you intrigued, but never feels forced. The ebb and flow of the album should be studied by anyone wanting to create a modern day rock opera.
Pete Townshend's writing is the star here. No ultra heady themes as touched upon earlier like in Tommy, no futuristic forecastations about what technology is going to do to our society (eerily accurate I might add, but when put through a mid70s vernacular laced with new age ideas it does not age well); it's all about the universal idea of growing up, the struggles everyone faces on some level, the need to fit in, the need to find love and understanding, and the need to just try and find out who you really are after spending almost two decades being who your parents want.
I wish I could just post the entire album, because everyone needs to experience Quadrophenia from start to finish, but below are two of my favorites.
I'm One - The Who (from "Quadrophenia")
5:15 - The Who (from "Quadrophenia")
Posted by Craig Tamble at 11:11