The Fog: Before Fog was Fog they were The Fog. 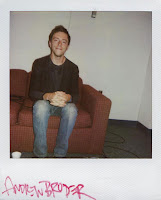 Back in 2000 (or maybe 1999), Andrew Broder released an album under the moniker The Fog. It was written and recorded mainly by himself (with a great spoken word intro by MF Doom), the album pieced together multi-layered turntablism with the occasional smattering of drums, guitar, and vocals. It wasn't a hip-hop album nor was it electronica and it most certainly wasn't a rock album, yet it was all of those things at the same time. Seeing him perform the songs live was truly an experience. The songs were loud and abrasive with a cacophonous wall of sound that pummeled you until the set was over. And every set he performed with his band was better than the last, and each time the songs morphed into something totally different than the album versions.
After a few years, The Fog was changed into Fog, and he re-released his first album on Ninja Tune, dropping some songs and adding a few others for the official release. I'll probably speak more of the individual releases at a later date, but for today, I'm sharing songs that you probably won't ever be able to find that showcase an amazingly talented musician.
Heartcrusher - The Fog (from "The Fog")
Just a Kid Growing Up - The Fog (from "The Fog")
Posted by Craig Tamble at 10:50