Phosphorescent: The name pretty much sums up the sound. 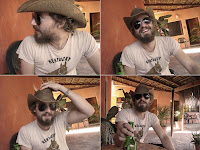 Phosphorescence can be described as "emitting light without appreciable heat as by slow oxidation of phosphorous," which is a fancy way of saying that something stays glowing before fading away even after you take away its energy source. Which is precisely what happens with the music of Phosphorescent. It's slow burning, haunting, and sticks with you well after you've turned the music off.
The band Phosphorescent is, for all intents and purposes, a solo project by Matthew Houck who hails from Georgia. He plays a Countrified Americana style of music that's never really upbeat but never too dour either. It just smolders and simmers with sparse percussion, a panel of stringed instruments, and a vocal styling that may take some getting used to as it isn't pretty, but it's far from ugly.
Phosphorescent - Dead Heart (from "Aw Come Aw Wry")
Phosphorescent - Cocaine Lights (from "Pride")
Like what you hear? You can also download some of his Daytrotter Sessions that were recorded in 2007 and 2008.
Posted by Craig Tamble at 08:25