Tales From The Crypt with the Mummies! 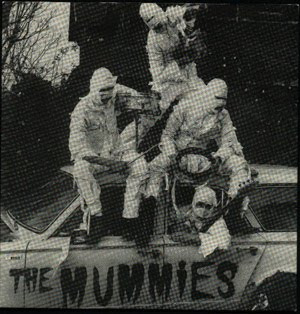 Sit down kids, its story time with good old grandpa Roland. See, when I was young, cable TV was a rarity to find in my neighborhood, and VHS players were practically unknown. So when an old horror film from the 30s, 40s, and 50s came through the good old bunny ears on the TV set, proper young boys made sure they were there watching it. It was our chance to get a glimpse into a whole era of films that seemed distant and lost to time. Bella Lugosi and Boris Karloff were ambassadors to a film tradition that had been forgotten, and it made an impact on my young and impressionable mind.

These films must have left an impact on San Mateo’s the Mummies as well, who played trashy, surf minded garage rock all while dressed as mummies. They put out a slew of great records in the 80s and early 90s (strictly on vinyl until recent reissues) and made a few infamous TV appearances. Countless bootlegs have been released over the years, but with the re-invigoration of the garage aesthetic and sound in the early 2000s, an effort has been made by the band and labels associated with them to re-release their music for a new generation to enjoy. And now that new cohort can include you.

The band got back together in 2008 and did some international touring to boot. They left this cryptic (haha, get it! Crypt! God I am a genius) note on their website before crawling out from their tombs.

“That's right, after 15 years of incessant nagging by every Tom, Dick and Larry, someone finally convinced the boys to travel forward in time to 2008 to play a show. Needless to say, the boys were appalled at the state of the future we all live in. Where are the flying fucking cars like in Blade Runner?! What the hell kind of future is this shit anyway? What, the best you can do is eBay? What happened to all the cheap equipment? Where did Thrift Center in Hayward go?! Where's Savers next to Thrift City in Redwood City?! Oh shit... where the fuck is Thrift City???”

In my opinion, they were and are the best garage rock revival band on the planet. 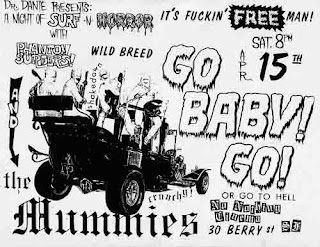 
(I Should better be lookin for Dangerman)