Norfolk and Western: M Ward and The Decemberists got famous, they didn't. 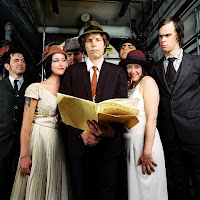 Portland, Oregon in the early 2000s must have been fun. Seems like some of the greats of the nuevo-folk-Americana music scene were just getting their start there. I stumbled on Norfolk and Western around the same time The Decemberists and M Ward were just getting some major recognition (in the indie world I suppose), and I thought it was great to have 3 wonderful bands from the same scene all getting their well deserved breaks on a national level. Yet I feel that Norfolk and Western got left behind, whether by their own choosing or because of bad luck, I don't know.
They have a bit more of an old school country flair to their sound when compared to the other acts listed, and don't really have any barn burners of songs, but Adam Selzer has a beautiful voice and their musicianship is rock solid so I highly recommend checking out a great band to sit and unwind to. It's hard to pick a few songs from a band that has a pretty large back catalog, but I'll do my best!
Norfolk and Western - Disappear (from "Dusk in Cold Parlours")
Norfolk and Western - All the Towns Near Boston (from "Winter Farewell")
Posted by Craig Tamble at 07:37