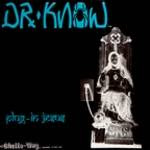 Dr. Know were the darkest of the Nardcore bands with a heavy emphasis on violent themes of destruction, doom and impending death. They had a metal-tinged thrash sound but we just considered them hardcore punk rock at the time.

This LP provides a great glimpse into what the Nardcore scene was like in the mid-198s0s. Hardcore punk, but heavier. It wasn't as urban as Black Flag or the Circle Jerks--Oxnard is a strawberry-picking town on the coast--but these dudes knew how to throw down. The pits for these shows were so vibrant and energetic. It wasn't mosh. It was non-stop slamming.

Their logo (below) was designed by Jaime Hernandez. He was already a well-known illustrator in the underground comics scene at the time. He also did the artwork for Stalag 13 and Agression.

After "Plug in Jesus" they released the "Burn" 7" EP (1985), an LP that contained "Burn" and some added tracks (1986), and then an LP titled "Wreckage in Flesh" (1988). As someone who could not get enough of their earlier recordings, this album was a real let down. Like so many other bands, as the 80s progressed, they changed to conform to the generic speed metal influence that had taken over. The uniqueness and individuality of the band was gone.

I know they released some more material after that, and there is band called Dr. Know that is still around today, and they play some of the old tunes, yadda, yadda, yadda. But this is the real deal. Kyle Toucher on vocals and guitar, Fred Mataquin on guitar, Ismael Hernandez on bass and on Rik Heller on drums.

"Plug in Jesus," "Burn," and some earlier material was reissued as "The Best of Dr. Know." You can find it used pretty easily.

Citizens of the World