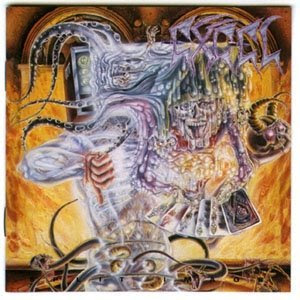 Excel --Dan Clements on vocals, Adam Siegel on guitar, Sean Ross on bass, and Greg Saenz on drums--were thrashers from Venice, CA with a definite Suicidal Tendencies influence. They were fast but they played with an intricacy uncommon to hardcore at the time. I'm not talking about the ludicrous arpeggios of so many speed-metal bands of the late 1980s but a seriously heavy groove.

I had the chance to see these dudes many times across the south land. Depending on the location, things could get out of control. It wasn't the band's fault, but you occasionally had knuckle-heads showing up to get into fights. One time I went to see them at Fender's in Long Beach with Blast, RKL and the Exploited. A bunch of Nazi skinheads* charged in and started sieg heiling. A few seconds later the Suicidals in the place tossed them out. I think someone ended up getting stabbed and shit.

Footage of the show available here but the audio quality is crap.

Excel: Your Life, My Life

Excel: The Joke's on You

*I know there are cool skins. I had friends who were down with Suicidal as well as those who were skinheads and I can remember many skins having my back and picking me up in the pit, so no hate mail please.
Posted by The New Centrist at 01:25