Tina Kaffeyah is a little rock band from Philadelphia that recently sent their new EP to us, asking if we would have a listen. They also said that they would allow us to have their baby if we reviewed it, and since I don’t have any known offspring, I figured I would take them up on their offer. I look forward to the insemination process!

As for the EP, it is good. Very good. It’s entirely instrumental, and the band crunches through four tracks of riff heavy post-hardcore. The songs on this record bring back memories of Baltimore’s Oxes, although I don’t know if that’s what these guys were intending. The band experiments with the formula enough to keep you interested: on “Why did I Drink that Colt 45?” they play with time changes and empty silence, until they finish off the track with a pulverizing set of chords. The end the EP with “This is Why We Can’t Have Nice things,” a track that clocks in at over 11 minutes but doesn’t get tired or overly repetitive.

If these cats would have been playing in the Bay Area in the late 90s, they would have been huge. Well, at least with kids who listened to hardcore. The band gets extra points for reminding me why I fell in love with this kind of stuff to begin with. Hopefully they find a home with a label that will treat them right. 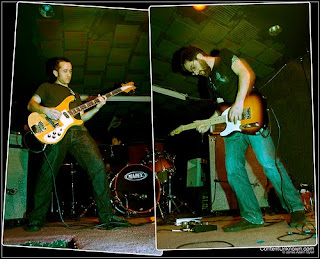 Check out their site here to download the EP, and their Myspace page if you want to hook it up with one of the guys in the band.