The Yah Mos - Off Your Parents! 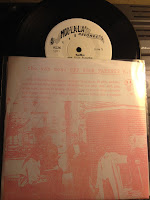 When I was in high school, I picked up the first Nation of Ulysses record (13 Point Program to Destroy America) on a whim based on the title. It did not immediately grab my attention; it was more disjointed than the music I was accustomed to at the time. I picked it up again when I was 18, and with my slightly more mature ears, it quickly turned into a favorite of mine. A few years back, I reflected on the politics of Ian Svenonius and found little in the way of real political substance, but as far as a bit goes, he has one of the best.

The Yah Mos clearly owe a great deal to the NoU, and while they didn’t recreate the wheel, they did make some incredibly catchy songs in their day. Better yet, they were from Sacramento, and thus much closer to me than the NoU. I’m not entirely sure when I picked this 7-inch up or where I bought it, but it feels like it has been in my collection for ages, so I’m inclined to say I bought it around 2000. Ive been told that members of this band went on to form !!!.

The Static Fanatic had this to say about the release:

“All these tracks are bashing away with brainy, wreckless abandon, yet they are held together by a sinewy rhythm section that never allows the songs to fall apart into jerkoff/spazz/mess/hardcore. Channeling and controlling this seething energy (in other words, making it accessible) without sounding tight-assed or self-conscious or devolving into a prog-punk-core band (with its nice, safe, mathematically derived lego-piece song construction aesthetic) is very tuff I says.” 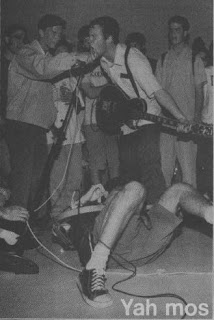 Since putting it on the turntable an hour ago, I’ve played it 5 times. It still sounds great after all these years, and is worth a listen for anyone interested in angsty, tight hardcore.