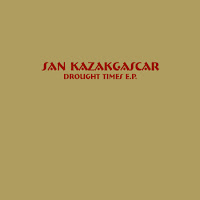 This was already reviewed by a compatriot at another music site I write for, but I thought it was so good that it required me own review here. San Kazakagascar come from the greater Sacramento area but their musical influences surely do not stop at the borders of this little cow time. Someone in this band picked up a Sun City Girls record at some point, or is well studied the releases from Sublime Frequencies. Or maybe they have never heard of both, and it will be a surprise to them that they were compared to such novel acts.

This is a great release from a group that mixes rocking psychedelic music with riffs and rhythms from around the globe. I had to pick it up on CD once I heard it, and I only wish they had some analogue version of this music available (tapes and vinyl would be great guys).
Posted by Roland Dodds at 16:23