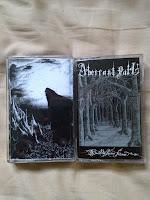 I dropped into Amoeba Records in San Francisco yesterday to sell some wares I am distributing, and of course, do a little record shopping myself. I picked up some good Bay Area hardcore 7 inch records I had been looking for in the dollar bin, as well as a few Black Metal tapes on the cheap. I figured I would start up a running series here at this blog to share them.

I was unfamiliar with both artists before buying these tapes, but they were both pleasant surprises. Blakulla is a one man act from France that plays some classic BM, and clearly took a great deal from Burzum's bit. This is what Metal Archives wrote about the record:

"Original released as a limited edition cassette last year on Cold Void Emanations, it has been picked up again for a reissue through Poland's True Underground Productions, who a few of you might recognize for releases by groups like Dark Fury or Thoth. I mention this connection primarily because the sound of the tape I'm reviewing is pretty common for the label, in that it represents the 'true black metal', primitive and highly aggressive and not really giving a fuck for the conventions of variation or accessibility for a wider audience. Blåkulla lives and dies on its hellish energy, a candle burning quickly on both ends with no pretensions of elegance or comfort, and while I might very well cite an influence of early Darkthrone, Burzum or Mayhem, Darkened by an Occult Wisdom is quite determinedly sinister even by those primal standards." 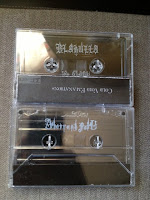 I picked up the tape for 2 bucks, and have played it a few times through since obtaining it. I definitely enjoy the longer song length that Blakulla employs (most tracks are around 6 minutes in length), but you have to really love the style to see much in this release and won't pull anyone closer to this type of music. Not that that was the intention of this release.

The other tape was from a group called Aberrant Path. The tape was self released on 200 produbbed tapes, and is accompanied by a nice Jcard that transcribes the lyrics and helps set the tone for the music. As far as I can tell, these guys were American and recorded this tape in 2005. I could not find a lick of information about the band, but a fine effort on their part.