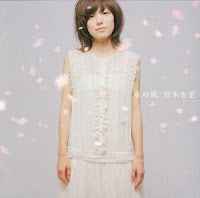 I picked up Anri Kumaki's single 春の風 a few months ago at a little Japanese music shop in San Diego. Since I am relativity ignorant of Japanese pop-music, I bought this CD from the dollar bin solely based on the cover. It wouldn't be the first time a pretty girl on a record has gotten me to spend hard earned cash, but as only a dollar was lost in the transaction, I figured it was worth the risk.

Anri sings pretty traditional J-pop, although heavy on the ballad end and relatively absent from the dance side of the equation. It is the touching stuff that would sit well within an emotional moment in an Anime program about the challenges of school life. I enjoyed it, and while this type of thing might not be for everyone, what in the world is?