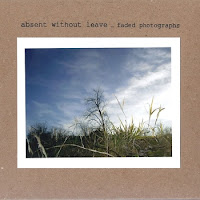 Absent Without Leave was submitted to me a few weeks back, and while a write-up did not show up here immediately, I have been dwelling on their beautiful recent record, Faded Photographs. I was a big fan of long, moody, instrumental music in the early 2000s, but with the release of the new Godspeed record, I have been pulling out some old post-rock records as of late. Absent Without Leaves fits well next to a group like Rachel's, as they provide enchanting, lush arrangements that could easily fit into an independent film score.

It is not a free download, but help the guys out. Times aint great in Greece, and I know it would be great to see more music like this out of the birthplace of democracy. There are a few CDs left as well if you like those digital discs, released by the folks at Sound in Silence Records.